I’m going to have to make this a fast one.  It just dawned on me that I have to get my computer charged and make it last for two days.  We will be in Lima tomorrow for two days and the computer store will be closed.  I’ve got to run it in there tonight and get a quick charge, and it is already almost 9 pm.  Yikes!

Yesterday, we had a day at sea, while we sailed to Pisco, Peru.  We are going in and out of time zones, and I am constantly confused.  My laptop, phone, Apple Watch and iPad all have different times on them.  We are all mixed up!

I thought that it was 10 am and time for the next lecture by the lady polar explorer.  I bustled down to the theatre only to figure out that I was an hour off and the guest lecture at this time was on Formula One auto racing.  Not exactly my topic, all I care about is how much mileage my car gets and if I can convince my husband to take the snow tires off.  Which didn’t work out well and I had to do it myself.

As there wasn’t anything else to tempt me, I decided to sit down and read my book while the talk went on.  What did I care about loud cars whizzing around the a track, waiting for the excitement of the car flying into the audience and mowing down bystanders?  My brother Burton and nephew Aaron are both probably shouting curse words at me, as they read this, as they love their fancy fast cars.

BUT, while I thought this would be boring, it was actually fascinating.  I ended up stowing my book and being totally absorbed by the talk.  Who would have thought!  This guy is a former Formula One race driver and engineer.  He gave a talk on how the safety features have changed for the cars and drivers since the 1940’s.  Sounds a bit dull, but it was really interesting.  Maybe it is a sign of my mental state, but his next talk is on tires, and I can’t wait!

The lady explorer, Sue Stockdale, was next up and gave another amazingly motivational talk about her trek across Greenland.  For who knows what reason, they skied across Greenland (which is anything but green) for 35 days in -20 below zero temperatures.  Oh what fun!  But she really can focus on how teamwork and motivation makes daunting tasks possible.  Which, of course, I translate into Weight Watchers.  The highlights that I am going to use in my life:

I figure if she could ski 35 days in sub-zero temperatures, I can navigate the buffet table on a cruise ship!

George grudgingly agreed to have sushi last night in a specialty restaurant.  Emma was so happy!  She ate enough sushi to sink a samurai.  George stared at his miso soup as if it was alive (which the miso actually is….).  The waiter poured hot water over the miso at the table.  I told him to wait for it to bloom, and he looked like he was going to get sick.  I cannot figure where Emma puts all of the sushi that kid can eat.  We both also had Lobster Ramen.  Ramen is Emma’s favorite food group – you know those horrible dried things that cost a dollar?  She would live on them.  The ramen last night was more than a few dozen notches above the Grocery Outlet variety, and it was filled with chunks of lobster.  Oh yes, it was good.

George desperately tried to find anything that was cooked and said he enjoyed it, but he mainly pushed things around on his plate.  Oh well.  Can’t win them all!  He was a game guy to go along, and he sure made his little girl happy.

Today we landed in Piscu, Peru.  Talk about a desert.  We have been sailing for hundreds and hundreds of miles and still there is more desert.  This place was the driest yet.  No plants of any kind, just hill after hill of sand.

Despite the sand and heat, this place has a fascinating history.  Probably because there wasn’t much else to do while living in a sand dune, Piscu became famous for brain surgery – 700 years before Christ.  Can you imagine?  There is a huge geoglyph of a candelabra (or the letter “Y” – they aren’t sure which) carved into the hillside outside of the town.  It can be seen from 21 miles out to sea.  They speculate it was a giant billboard to let people know that this was the place to get holes drilled in your head.  Apparently, it must have been pretty successful, and people came from miles around.

The pre-Incan people also specialized in flattening heads into pointy shapes.  If you wanted to look like a trendy Conehead – this was the place to come!  They could get a skull to the lofty length of 19 inches.  This may explain why the brain surgery was needed…..

Today, Piscu is a thriving town of 3,000 people, all wondering why they live in a giant, hot sandpit.  The town was built at the mouth of a river that no longer is with us.  The bay silted in and now only smaller fishing vessels can moor there.  They have a lovely brick promenade that faces the beach.  It is lined with little restaurants and junky tourist stores, filled with fascinating nonsense.  No prices on anything – they size you up and declare a price.  Something tells me the price ends up to their advantage.  Not that it stopped us from buying stuff!  I got an alpaca sweater for $10, which made me pretty happy.

Our ship is way too big to be able to moor in Piscu, so we had to stop about 30 minutes from there and have a scenic tour of sand hills to get to town.  Before you think this was a wasted visit – I have to tell you it was the most magical excursion that we have ever been on.

The Paracas (the name of the ancient people who loved their coneheads) Nature Reserve is an island area known as the Galapagos of Peru.  The Ballestas Islands.  Oh. My. Goodness.  We took a small boat from Piscu and traversed about 50 minutes to these small islands.  That alone was fun.

The guide was great and he speaks five languages; including Norwegian.  Very useful language in Peru.  I had to laugh at the name of their company as shown on their backs:

Ballestasexpedition.   I know my mind can be a bit twisted, but I was wondering if we were sailing 50 minutes to get to a nude beach.  All I could see was “sexpedition.”  If we took a poll, however, I bet most of the boat riders would agree the islands were better than sex.  Of course, taking into account the average age of the boaters, most everything is better than sex.

The islands, however, are truly stunning.  The have natural arches throughout the rocks, which are gorgeous.  Waves spilling through them, the sea a gorgeous green and blue. 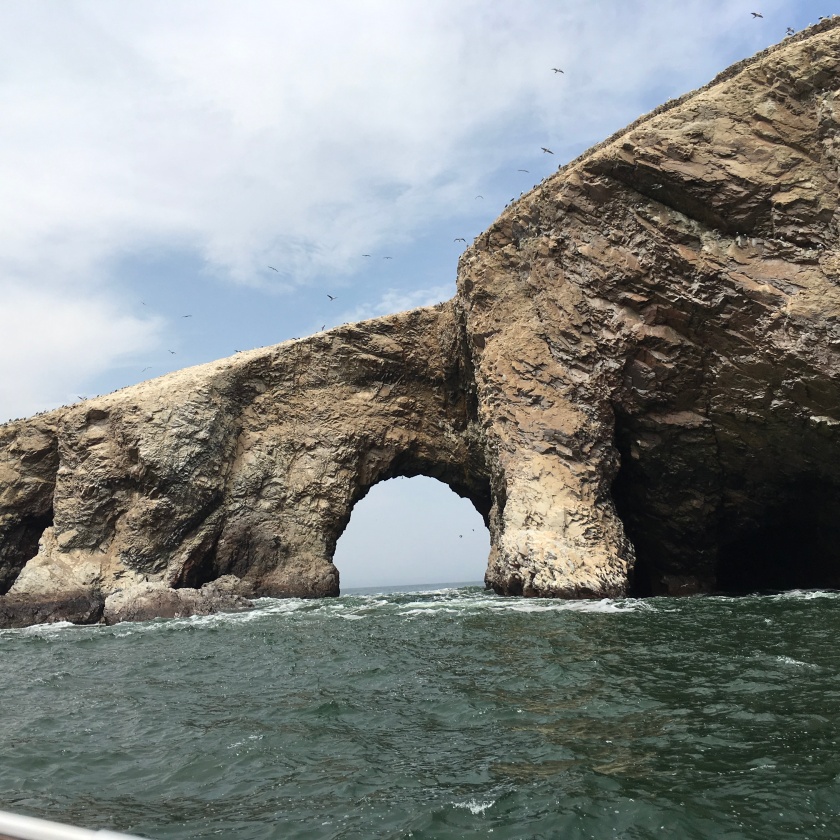 But what makes it memorable are the five million birds that roost on the islands.  Yep, I said five million.  Penguins (yes, REAL penguins), cormorants, pelicans, little gray thingies with red heads, black, blue, gulls, every gorgeous bird lives on these islands of rock.  The surface area looks like it is alive, undulating and covered in feathers.  Actually, it is really covered in copious amount of bird poop – and the stench permeates the very soul.  But wait, there’s more!

There are sea lions on the base of the rocks.  They lounge around, sunning themselves.  There were moms teaching their tiny babies to swim and big bulls posturing to impress the ladies.  It was simply one of the most amazing sights that I have even seen.

One island is known as the maternity rock; the mama seals go there to birth their babies.  There were dozen of mamas and babies lying on a beach.  Somehow a group of penguins had wandered down into them.  The guide said watch them, that they shouldn’t be there.  Sure enough, a group of sea lions started bellowing at them and chased them up the bank.  The poor little penguins were waddling as fast as they could go to get away.

The boat pilot took us with a few feet of the birds and sea lions.  How we didn’t crash into the rocks is beyond me.  The boat was heaving up and down with the rhythm of the waves.  Between the stench and the swells, more than the waves were heaving and I almost lost my breakfast.  I had brought Dramamine, and dosed myself liberally.  I’m proud to say that I didn’t throw up on the feet of anyone else in the boat.  But it took will power.  If the scenery and wildlife hadn’t been so dramatic, I probably would have became sick.

The cormorants rose to the sky in waves of black and took off in search of fish.  They would see some and dive straight into the water like guided missiles.  The fisherman follow the birds to locate good fishing spots.  No wondering if the fish are there – the birds lead them straight to the best spots.

It was simply stunning on a perspective and scale I didn’t know was possible.  Wow, how lucky we were to see it.

After we returned to solid ground, and my stomach had calmed down, we had a glorious fresh seafood lunch in the little town.  People were walking off the boats, carrying bags of fresh caught fish for the restaurants and their homes.  Peru is know for ceviche, which is a raw fish dish that “cooks” in a marinade of citrus.  Oh baby, you know what I like!  It was absolutely sensational.

Emma had calamari that was so tender that it melted in the mouth.

George had a seafood rice dish from which we all stole forkfuls.

I had my first authentic ceviche (imagine an accent over the last “e” in ceviche.  I don’t have a clue how to make that appear!).  It was served with a dried hominy that was much like eating a nut.  They also had a cooked hominy and sweet yams.  The citrus marinated raw fish was covered with sweet red onions.  Every bite was magnificient.  We seriously chose an amazing restaurant.  And I ate the whole thing….

Totally stuffed, we staggered down the streets buying up tourist mementos, then took a bus back to our ship.

We were so exhausted from our adventures that all three of us took afternoon siestas in our room.