We have a gorgeous view from our room; we overlook the flat roof of the immigration building.  As the wind blew and the rain poured, I admired the way the waves of water seemed to dance on the tar paper roofline.  Ahhhhhh, the day looks like an adventure.

Our call time for the excursion was even earlier this morning.  We had to report at 7:00 a.m. for another ten hour guided mass sojourn to the summer palace of Catherine the Great.  Ellie is feeling a bit better, but definitely moody.   More than a bit of teen attitude.  Grumpy, I mean Grampy, would rather have a case of jock itch than get up to stand outside a palace in the rain, but he gamely agrees to go.

END_OF_DOCUMENT_TOKEN_TO_BE_REPLACED 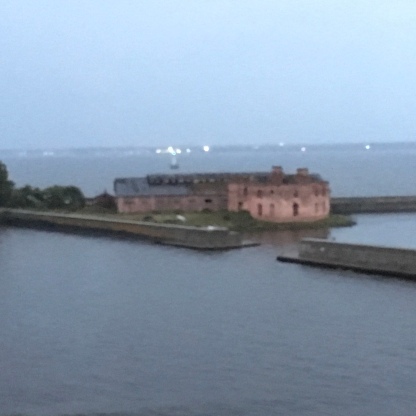 A spooky, and most surely haunted, building complex showed itself in the early morning mist.

The early morning skies were misting and cool as we came into St. Petersburg.  I had missed sunrise, but I’m not sure there would have been much to see.  As I was hanging over the railing looking through the misting fog, the building complex above appeared in the middle of the bay.  I have no idea what it was, but believe me it was spooky dooky.  These were large buildings, and they appeared to be on ground, but it was smack in the middle of the bay.  The abandoned, derelict concrete buildings on either end  had a fair sized pond between them, and the whole thing was ringed with a low concrete wall.  A narrow opening (see above) went into the pond.  Definitely not large enough for anything military (so no dead Russian sailor ghosts), but perhaps something for fishing?  Very perplexing and it lent a definite air of mystery into our trip.  If anyone has an idea what this was – let me know!

We have a two day visit to St. Petersburg.  Visas are not required for cruisers, but it also means we have to stay with a government sanctioned guide.  This is not only expensive, but our time is just not our own.  No wandering around town seeing the sights on our own.  We could have purchased visas, of course, but the added expense for two days didn’t seem worth it.